We started at 7.45 on a soon to be very tiring Friday. Our first job for the day was to get the honey jars and lids out of the roof, this was to be the scariest part of the day. As I gingerly descended down the stepladder laden with a box of honey jars I heard Simon’s voice call out “Here’s another box”, I was already feeling hungry.

As we left the house in Eimear’s car with an empty boot soon to be filled, I was feeling slightly tentative about the day ahead. This was not helped by Simon describing how before he got 200 stings in one 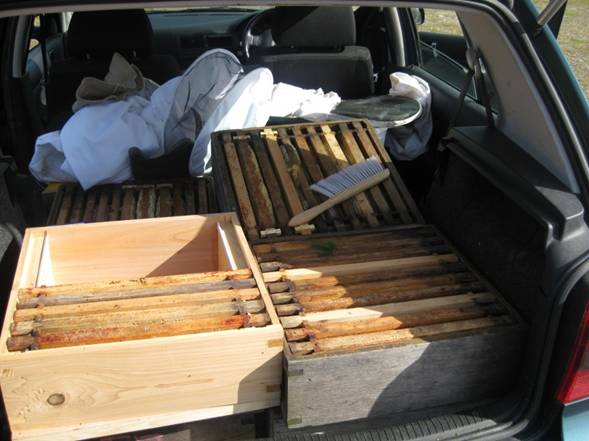 inspection (luckily not all of them broke the skin). As we got closer to the apiary site the countryside that surrounded the road calmed my nerves. As we left the road and entered the forestry commission site all I could see was rough open land and didn’t know where the hives could be! The car pulled up in the middle of nowhere and we both got out and suited up, then Simon led me round to the bees. The first hive that we took the honey off had 2 full supers.

As I left the site with a wheelbarrow full of honey I was already exhausted and it was only lunchtime! The next site that we visited was called Bohilla and this was the site that had the angry bees in it. As we pulled into the drive of Nan’s house there was no sign of the bees. We suited up again and let out the remaining bees whom were trying to protect their honey. I struggled through wood behind Simon getting caught on the twigs as I went. As we arrived to the hives I could see 6 hives and a nuc box! 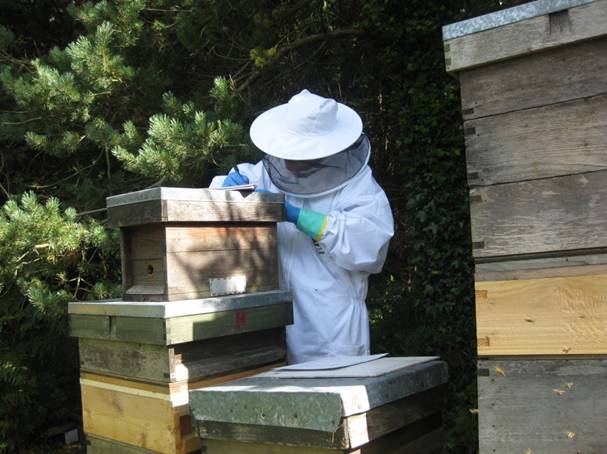 As we got into the robbery Simon suddenly remembered that we had to write up the inspection notes. This job was down to me and when you are gripping a pen with 2 pairs of gloves on it takes double the time! When we had finished we took all the honey back to the car all 9 boxes of it.

When we got back home we decided that it was time for lunch (as we had been working so hard), so we went to the Chippy up the road. After lunch we got to the messy bit EXTRACTING. This started with putting newspaper down to try to contain some mess, which later got screwed up and later made it even worse.

Halfway through the extraction process and the floor was Eimear’s nightmare, there was newspaper everywhere honey and cappings on the floor and the extractor was going wild dancing all over the floor, not to mention the burst frames! The only thing that released my mind from this mayhem was the beautifully capped frames of honey of which this was one. 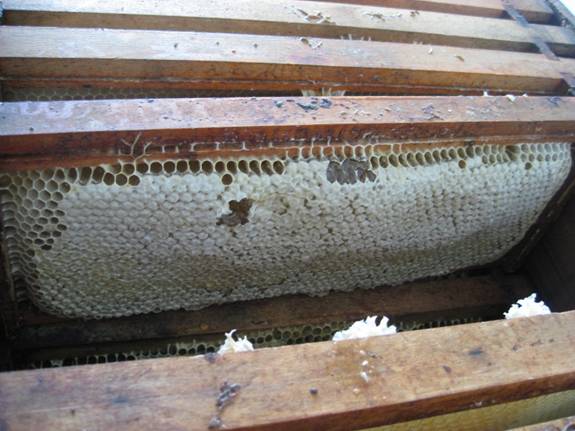 At this point the smell of honey was pungent in the house and as my parents came to pick me up for the night they got blasted with the scent of Irish honey that they had never smelt before.

Day 2: As I arrived at an all too familiar sight, Simon slaving over a bucket of honey and trying to keep the mess down as much as possible. I was given my orders for the day BOTTLING, BOTTLING was not the word to describe it, it was more like slave labour. I had about 150 jars to fill and it wasn’t going to be easy, I started by doing the very painful task of putting the lids of the jars into the oven to sterilise them and to this day my hand has only just recovered from it.

I have to say that the good thing about bottling is that you have to make the jars look nice which means digesting about a pound of honey thought the process. This is why I think Eimear got a bit angry with me for taking her job and making her retire to the sofa in front of the T.V.

At three o’clock I was nearly done and we decided to cut it short and start constructing some frames this meant a lot of banging. After we finished the extracting we had to clean up the extractor. This would have been easy but there were swarms of bees around it wanting the honey that we were trying to clean. After we had battled through the bees we had to take the extractor back to a man called Seamus.  When we arrived at his house (without dropping the extractor out the back of the car) we had to get the extractor down the drive. This would have been easy in normal circumstances  but there was a car in the way. We had to go through the next door neighbours house which was being refurbished. As we got to the door we had to unlock it as Seamus wasn’t in. We got back in the car we thought that it was a bit strange that he wasn’t in.

In fact I heard later from Simon that he was in and that he didn’t hear us!

That was our honey harvest experience it was tiring, it was sticky but it was fun.

Simon’s note: I’m very grateful to Tom for his help with the harvest and for his contribution to the blog.  Cheers, mate!